by Alta Lodge February 28, 2009 0 comment
“He always made everyone feel like they were the most important person in his life.” –Chuck Lynn Biddulph 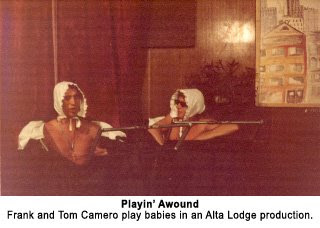 On the morning of January 23, 2009, fond memories of Frank Menendez began to pile up in Keith’s inbox like flakes in an Alta snowstorm. And like a good Wasatch storm cycle, the e-mails recounting elaborate dinner parties and naked tangos didn’t stop accumulating for days and days.

Keith—the unofficial contact for the “USA contingent” of Frank’s Alta Lodge diaspora—was tasked with sharing the somber news he received from across the pond that morning. He typed,

Hi Everyone: He’s gone but will always be in our memories. And now he’d want us to remember those good times, smile and laugh over a drink and a good meal… and get on with a good life.

And a role model for living the good life Frank was. “From all the e-mails I have received over this last week,” remarks Lucy, his friend and caretaker over his last years living in England, “I can see that these memories always contain the elements that meant most to Frank: food, music and fellowship.”

A native Brit, Frank defended his country during World War Two while stationed in Burma. After the war, Frank pursued passions and a career quite distinct from his military past.

Though Frank earned his living by cooking, his training and great loves were also music and theatre. He studied music in Dublin and had been to more Shakespearean productions around the world than anyone I know. He was always going to write an opera or a symphony. But somehow living always got in the way. –Lucy 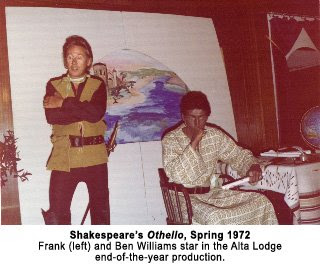 Frank’s love for theatre proved contagious during his time as Alta Lodge head chef in the late-1960s through mid-1970s, spawning productions with employee-studded casts, including Shakespeare’s Othello and Chekhov’s The Marriage Proposal. Directed by none other than Frank himself, the performances entertained and amused guests and fellow emps alike. Every Christmas Eve, Frank’s well-rehearsed choir of canyon employees would travel from lodge to lodge singing Christmas carols.

Before finding home at the Alta Lodge, Frank worked in North American ski towns including Aspen and Whistler. Always an entertainer no matter his locale, Frank loved to throw great dinner parties complete with fine food and plentiful libations.

For every four to six guests was a bowl of sour cream and one of caviar to go with the baked potato, and a bottle of Stolichnaya vodka frozen in a block of ice! Before the evening was over most of the vodka was gone, as was a great deal of wine…. –Ben Williams

People gravitated to Frank, especially the younger crowd, to whom he taught a thing or two.

Frank’s friends became his family. He liked to gather young people around him. He was their guru, the older man who could teach them to cook, to savour the good things of life, to mix a drink and toast the sunrise after a fine party. –Lucy

Knowing how to dance was a key addition to Frank’s food-focused fiestas.

“I remember Frank and Winkie doing a naked tango through the kitchen door and into the dining room where Bill Levitt [Alta Lodge owner] was sitting. Frank never missed a beat. A dramatic turn and he was back through the doors into the kitchen.” –Anne Voye Reynolds

Frank built as well as facilitated enduring friendships, as evidenced by the many memories shared electronically amongst Alta Lodge emps now living in Afghanistan, Dubai, the UK, and beyond.

Maybe Frank’s greatest legacy is the relationships he allowed us to create—both with him and with each other. –David DeLong ’75-’76

Somewhere beyond our world now, Frank‘s impact continues to be felt by those he loved.

Wherever he is, I have no doubt that his ingredients are fresh, his knives are sharp and his apron is lovingly soiled. My life is all the better for having known him. –Laurie Bernhard ’70-‘76

One thing is certain: Frank is remembered fondly.