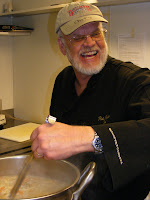 Head Chef Paul Raddon is serious about fish. And not just cooking it.

And he’s not talking about the dozens of freshly bought fish he regularly loads into the lodge’s walk-in refrigerator. Raddon prefers hooking his own.

After decades of casting flies and learning the intricacies of the sport, Cheffie explains his motivation simply:

“I fish because the voices in my head tell me to.”

Fishing the Provo River near Alta year-round, his most common cold-blooded adversaries are Cutthroat Trout and Brown Trout, which he catches by the dozens on good days. 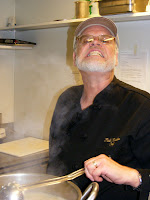 But even on a bad day, a resolute Raddon refuses to be shut out. He’s spent too many days sharpening his skills on rivers from Yellowstone National Park to Hawaii—sniffing out new recipes all the while—to head home defeated.

But whether 30 fish hop into his boat or only one, each fish will live to swim another day. Cheffie practices pure catch and release; not a single fish he catches will hit his frying pan.

Other fish, however—those destined for the taste buds of Alta Lodge guests—won’t be so lucky. At least they’ll go out in a flourish of the finest flavors.