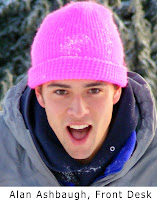 On December 16, we skied the best powder day since the lifts started turning with 11 inches of fresh. In the nine days that followed, Alta received 6.5 FEET of snow, with the storm cycle building up to a Christmas Day climax.

On Christmas Eve, the National Weather Service predicted 2-3 feet of snow in what they claimed would be “the bomb” of the storm cycle–the grand finale; a Christmas gift from Mother Nature.

Not to disappoint on Christmas, “the bomb” hit Alta hard. Fierce wind gusts of up to 40 mph shook the 70-year-old lodge; the snow fell in blankets.

With several feet of new snow in Little Cottonwood Canyon, Alta’s world-class avalanche control team went to work to keep the town safe. At 8:30 pm on Christmas Day, the Alta Marshal called interlodge–Alta’s gentle form of martial law–which means that no one is allowed outside until avalanche control work is completed. The next morning, the Marshal called for “maximum security” interlodge. In this Alta equivalent of an air raid evacuation, guests and employees in all of Alta’s lodges were awakened and gathered in the safest zones within the lodges while avalanche control work was carried out.

By 10:15am on the day after Christmas–with much avalanche control work completed–rumors were flying that interlodge would soon be lifted and the ski lifts opened. This news lured a dozen guests and employees to the Alta Lodge locker room, where they waited. Goggles on, skis in hand, they anticipated the lifting of interlodge so they could charge out the door and get up the mountain first, chasing the dream of first tracks on a powder day.

At 10:45am, interlodge was dropped. The determined dozen funneled out the door in a flurry of skis and poles. The satisfying clicks of bindings locking tight were replaced by the whooshing of skis on fresh snow.

When all was said and done, the Christmas Storm of 2008 dumped 25 inches.